We are pleased to announce that we have released ((OTRS)) Community Edition version 6.0.38 today. This version introduces the modernized customer user interface that we teased last week.

Each customer user can turn on the new interface by going to "Preferences" and checking the option "Use modern variant":

The system administrator can also turn on the new version by default, using the system configuration setting "Loader::Customer::DefaultSkin::UseModern".

Give It a Try!

The latest version is up for grabs in the Downloads section.

Note: Please be advised that at this time the new customer user interface is not yet complete and might not work correctly in some system configurations. If you use the system in a time-critical business environment, or with additional packages such as OTRS::ITSM, we suggest you keep using the standard version until the new one becomes mature.

The upcoming version 6.0.38 of ((OTRS)) Community Edition, which is scheduled to be released before the end of the year, features the introduction of the refreshed customer user interface. This is part of our ongoing effort to make the UI of the system more user-friendly and appealing, for both agents and customer users.

We are pleased to show a few pictures of the new interface and the changes that it brings. 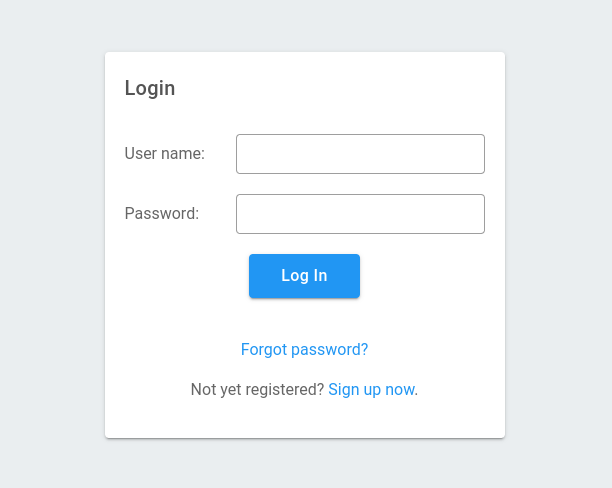 New Look of the Ticket Screen

The most significant improvements have been made to the part of the interface where customer users probably spend the most time — the expanded ticket screen. In the new version, it is displayed in a way that's similar to the conversation layout often used in web-based email services.

The message form now makes use of modernized input controls, such as a new text editor box and ticket priority selection list with colors. 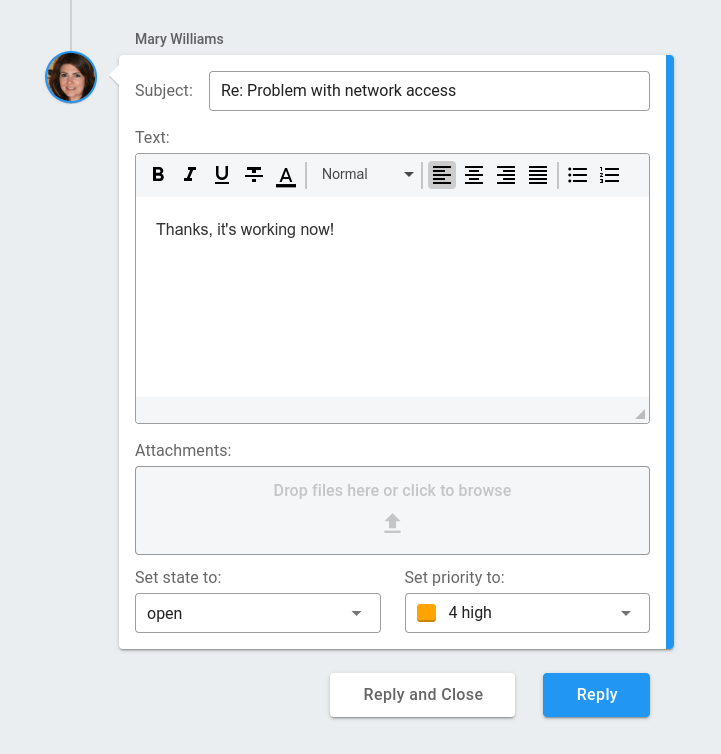 The "New Ticket" form has been redesigned as well to use the enhanced input controls. The picture below also shows an example of how field validation messages look in the new style. 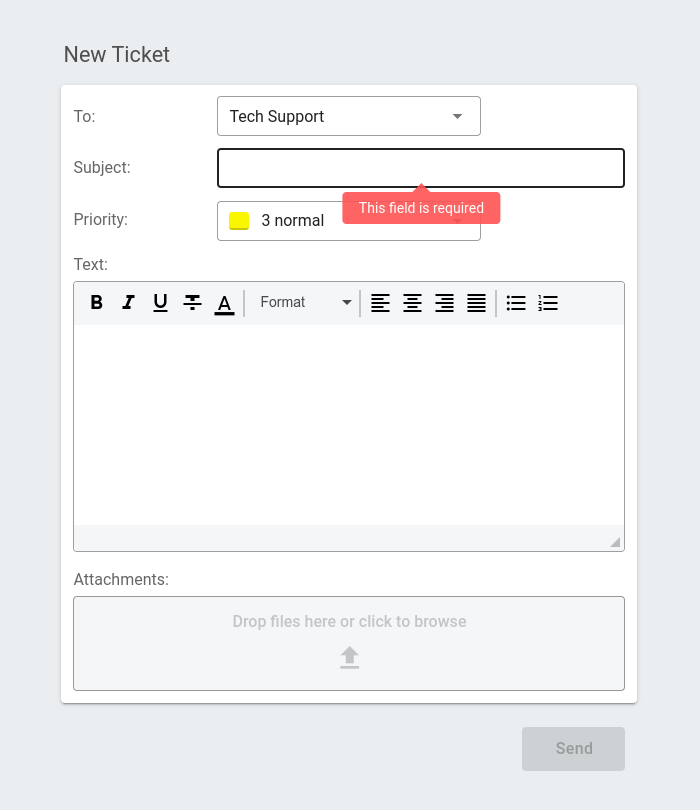 We have made a short video that demonstrates the new customer user interface in use — you can watch it below or on YouTube.

The new version is in the final stage of getting ready to be released and will be available for download before the end of the year.

The latest release of ((OTRS)) Community Edition comes with support for OAuth2 authentication for email accounts used to receive email tickets and send messages. There are built-in configuration templates for two most popular email service providers: Gmail and Microsoft 365.

This feature might be especially important if you are using OTRS CE with a Microsoft 365 email account, because Microsoft is disabling basic (password-based) authentication in January 2023. If your email accounts are still configured to make use of passwords, you should switch to OAuth2 soon.

One of our primary goals for the development of OTRS CE is making the system more friendly and easier to use, for both end users and for administrators. We have already simplified the installation with the introduction of the Shell Installer, and the next objective was to make the system just as easy to update when a new version is available.

Version 6.0.37 is a major step towards that, because it brings a new method of performing system updates that utilizes the OTRS CE Console program. All you need to do to update your system is download the new version and run a single command which then takes care of everything.

The animation below shows a sample run from our tests:

As with many of the new features that we're working on, please keep in mind that the new update mechanism is under active development and at this moment its use is limited to basic configurations of the system. You should not use it yet if your system has additional packages or custom modifications. Nonetheless, we keep working on it and plan to add support for systems with extra packages in the next release.

The long-term goal with respect to system updates is to implement automatic checks for new releases, and to allow initiating updates from the browser, in the administrator interface.

As always, you will find the new version in the Downloads section.

This release brings much more than the small increase in version number might suggest. Most importantly, it includes the refreshed agent interface that we have been working on for some time, and which is the first step towards making OTRS CE more modern, flexible, and user-friendly. 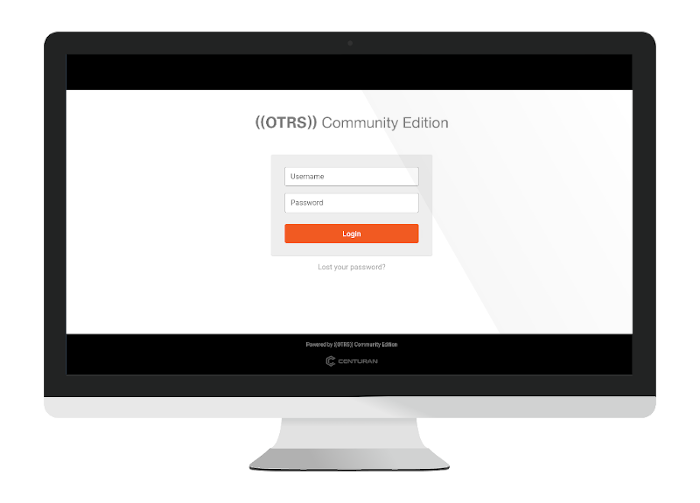 How to Enable the Modern Agent Interface

The new interface can be enabled on a per-user basis using agent preferences. Upon logging in, click the user's avatar in the top left corner, and go to "Personal preferences". Choose "Miscellaneous", make sure the "Default" skin is selected, and check the "Use modern variant" option:

Save the setting, reload the page, and enjoy the new look!

If you want to use the refreshed interface by default, without enabling it for specific agents, you can go to the administration screen and set the system configuration option "Loader::Agent::DefaultSkin::UseModern".

Note: Please keep in mind that at this moment the new agent interface is still considered experimental and some of its parts aren't complete. If you use the system in a time-critical business environment, or with additional packages such as OTRS::ITSM, we suggest you keep using the standard version until the new one becomes mature.

Apart from the refreshed interface, one new feature of the new version is the ability to change the default ticket priority colors: 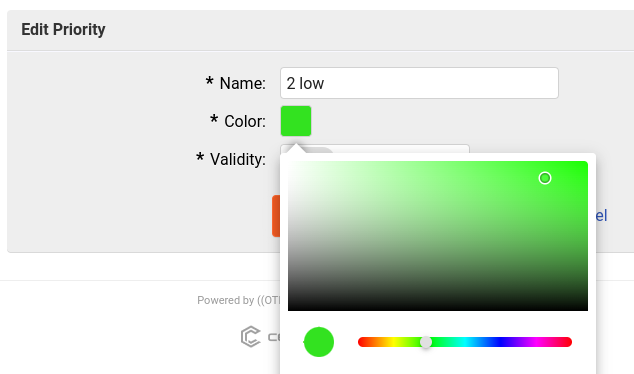 Other changes that have been introducted in this version aren't as significant from the user's perspective, but there have been numerous fixes in the system update process, as well as improvements with respect to compatibility with other versions of help desk software based on the original ((OTRS)) Community Edition.

Up until this version, the recommended way to install ((OTRS)) Community Edition was to use the shell installer. This version is the first one that is also available as RPM packages for Red Hat-based Linux systems.

More distributions, as well as DEB packages for Debian-based systems, are coming soon.

We have created a short promotional video for the new version of the system — you can watch it below or on YouTube.

The new version of ((OTRS)) Community Edition is available in the Downloads section.

We are looking forward to your feedback! Please contact us at info@otrscommunityedition.com.

This release also brings a few updates to the Shell Installer utility, including added support for the most recent version of Rocky Linux (8.6).

You can get the new version by going to the Downloads section, and selecting the Shell Installer package, or one of the compressed source archive files.

This is a security release which fixes several vulnerabilities that have been discovered in other forks of the original OTRS codebase:

Version 6.0.34 is available for download in the Downloads section as a Shell Installer package, and as compressed source archives.

Web applications that store and transmit any kind of sensitive or personal data should only allow secure, encrypted traffic. Yet, the traditional method of installing ((OTRS)) Community Edition didn't really cover this part, leaving it as an exercise for the administrator. And while configuring SSL on a server isn't too difficult, it does require additional work and might take quite a bit of time if things don't go smoothly right away.

We strive to make ((OTRS)) Community Edition more secure and easier to use, not only for end users, but administrators as well, so we thought it's time to address this matter. The new version of our automated Shell Installer utility allows you to easily install a free SSL certificate provided by the non-profit Let's Encrypt project. All you need is to have a domain name pointing to the server on which the system is being installed, and to provide an e-mail address for administrative notifications.

This is how the configuration looks during installation: 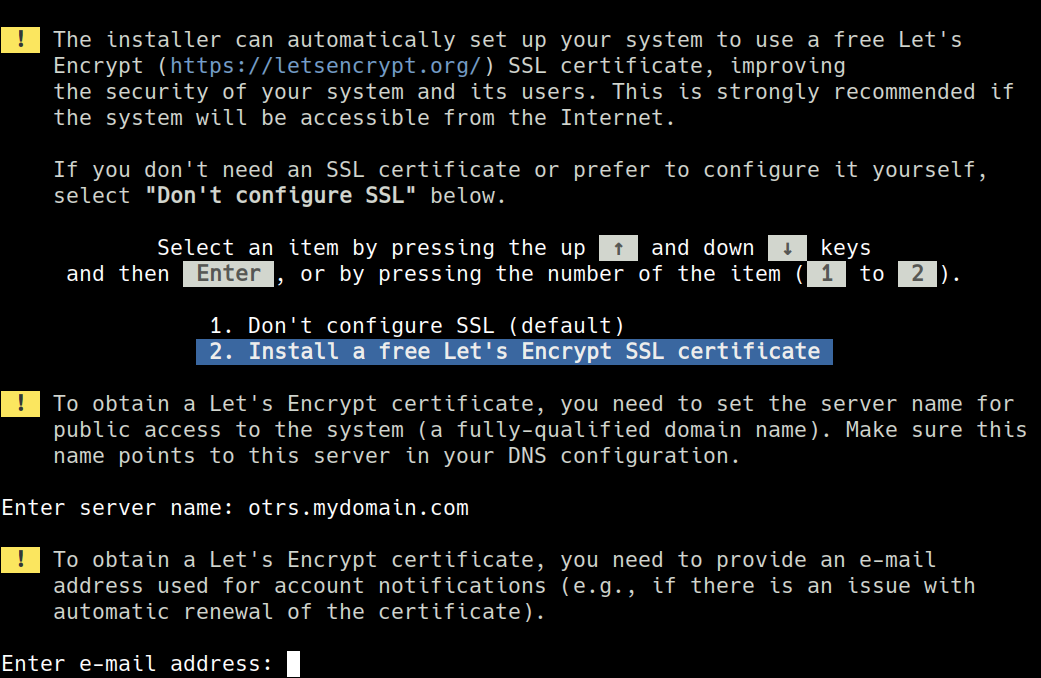 The installed certificate will be automatically renewed, as it is usually the case with Let's Encrypt certificates. The system will also be configured to enforce encrypted connections if a browser tries to connect using plain HTTP.

The updated shell installation tool is now available in the Downloads section and we welcome you to try it out. It is still considered experimental, but will soon be ready for prime time.

This version comes with several security fixes, including a denial of service vulnerability that potentially allowed an attacker to cause a performance drop or even a complete crash of the system by sending a specially crafted e-mail message. This vulnerability has been discovered by Alberto Molina and reported by OTRS AG in security advisory OSA-2021-16.

In addition to that, this release comes with numerous updates to JavaScript libraries, fixing a number of vulnerabilities discovered in previously distributed versions:

The new version is available for download in the Downloads section as a Shell Installer package, and as compressed source archives.

As our refreshed version of the ((OTRS)) Community Edition agent interface is getting closer and closer to release, we have made it available for testing on our demo server. If you would like to take a peek at how the new interface looks and feels, you are welcome to go to new.demo.otrsce.com and try it out!

You will find a switch at the bottom of the page which toggles between the old and new interface style, making it easy to compare the original look and the refreshed one.

Please keep in mind that this version is not ready for prime time yet, there is still a lot of (mostly) small fixes that need to be made, and we're working on it -- watch this space for updates.